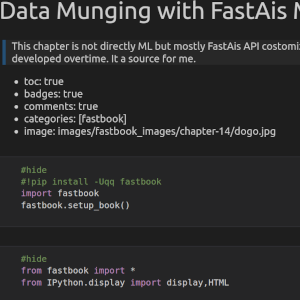 We have seen what Tokenizer and Numericalize do to a collection of texts, and how they're used inside the data block API, which handles those transforms for us directly using the TextBlock. But what if we want to only apply one of those transforms, either to see intermediate results or because we have already tokenized texts? More generally, what can we do when the data block API is not flexible enough to accommodate our particular use case? For this, we need to use fastai's mid-level API for processing data. The data block API is built on top of that layer, so it will allow you to do everything the data block API does, and much much more.

The fastai library is built on a layered API. In the very top layer there are applications that allow us to train a model in five lines of codes, as we saw in <

The factory method TextDataLoaders.from_folder is very convenient when your data is arranged the exact same way as the IMDb dataset, but in practice, that often won't be the case. The data block API offers more flexibility. As we saw in the last chapter, we can get the same result with:

But it's sometimes not flexible enough. For debugging purposes, for instance, we might need to apply just parts of the transforms that come with this data block. Or we might want to create a DataLoaders for some application that isn't directly supported by fastai. In this section, we'll dig into the pieces that are used inside fastai to implement the data block API. Understanding these will enable you to leverage the power and flexibility of this mid-tier API.

Note: Mid-Level API: The mid-level API does not only contain functionality for creating DataLoaders. It also has the callback system, which allows us to customize the training loop any way we like, and the general optimizer. Both will be covered in <